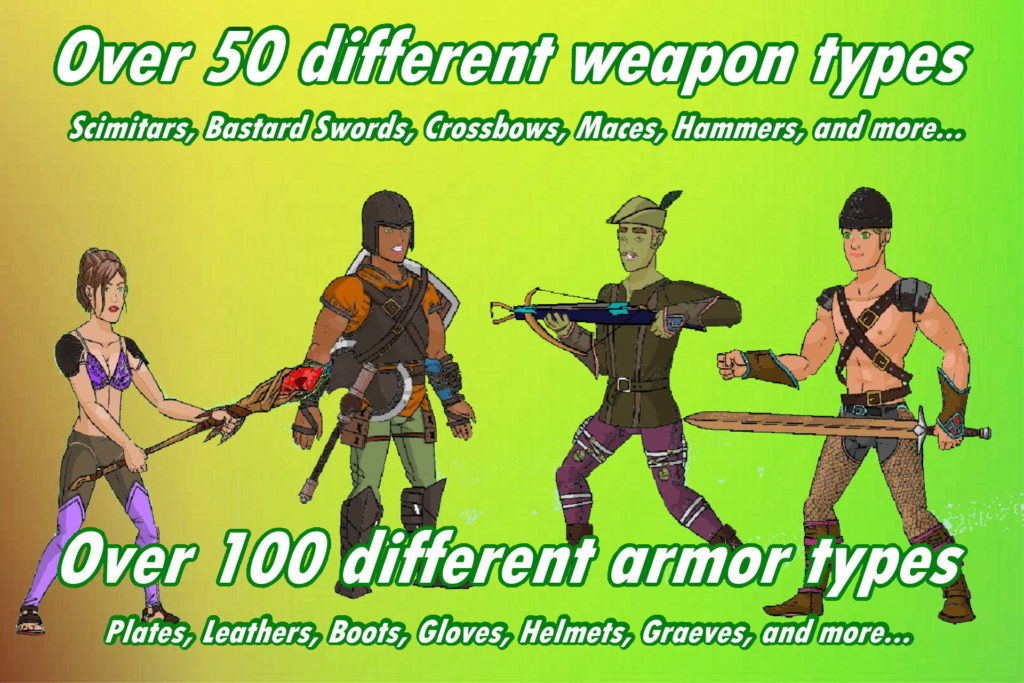 IDC has a wide variety of weapons to choose from.  Most of these are purchased at the Merchant in town, and the selection available is frequently changing.  Having a good weapon is critical to the game.  But money is usually tight.  In the game you will spend most of your money earned from expeditions in pursuit of better and better equipment.  You’ll pretty much want to check the Merchant’s stock at least every other time you come back from an expedition.  But also keep in mind that if you have your eye on a particular piece of gear, it may not be there by the time you save up.  Evervale is a busy place and the Merchant’s stock is constantly rotating.  Generally, if you see something you like and you have the funds, grab it.

In the Fall during the Harvest Festival, there is a traveling merchant that stops by in town.  Her goods tend to be much nicer than the Merchant’s, but much more expensive.  If you see something that she has, that is pretty much your only chance to get it.  Her inventory completely changes every year.

Weapons (and armor) can occasionally be found while exploring.  It is also acceptable to take weapons from monsters that you vanquish.  Keep in mind that these are still considered to be loot, and if you have hirelings on the party and decide to keep a weapon, you’ll have to buy out the hirelings’ shares of it (even if you’re giving it to a hireling to use!).

When you first start a new game, you’re likely to have just enough gold to afford a poor quality weapon with next to nothing left over.  As you earn more gold, you’re going to want to upgrade your weapon as soon as possible before you start worrying about armor or other things.

Weapons can be categorized into either

Melee weapons make physical contact with a target.  You generally have to be in an adjacent grid square to use a melee weapon (the exception to this is explained in a bit).  Plus, melee weapons can only attack in the CARDINAL directions (North, South, East, or West).  They cannot attack DIAGONALLY.

Ranged weapons can attack in any direction and from a distance.  They typically fire some sort of projectile, whether that is a physical object like an arrow or bolt, or an elemental charge like a lighting bolt, and have a maximum distance that can vary.  Ranged weapons typically require line-of-sight so you usually cannot hit someone behind a taller obstacle or another person.  You can shoot over lower objects, like smaller rocks, stumps, fences, etc..

Weapons are broken up into TYPE categories.  Some weapons are one-handed (1H) and some are two-handed (2H).  The list of one-handed weapon types includes 1H-SWORDS, 1H-MACES, 1H-HAMMERS, 1H-AXES, DAGGERS, CLUBS and WANDS.  When equipping a one-handed weapon, you may hold another item in your off-hand, such as a shield or torch.  Rogues can hold a DAGGER in their off-hand — this is called dual-wielding and only Rogues can do it.  Dual-wielding contributes 50% of the off-hand’s damage when hitting an opponent and 50% of the off-hand’s blocking when defending.

Two-handed weapon types include 2H-SWORDS, 2H-MACES, 2H-HAMMERS and 2H-AXES.  It also includes STAVES, BOWS, CROSSBOWS, SLINGSHOTS, POLEARMS, and SPEARS.  When wielding a two-handed weapon, you cannot hold anything else.

Different character classes will have an

AFFINITY for certain types of weapons that grant a +10 ACC bonus, as discussed in the section on Accuracy, Defense and Magik Defense.  This is a significant boost and it is strongly recommended that characters stick to weapons for which they have an affinity, at least at the lower levels.  Also, as discussed in the Skills section, there are skills that will grant a +5 ACC and +10% DMG bonus for given weapon types.

Here is the list of weapon type affinities by character class:

FIGHTER: SWORDS, HAMMERS and AXES, both 1H and 2H, and SPEARS

CLERIC: MACES and HAMMERS, both 1H and 2H, CLUBS, and CROSSBOWS

PALADIN: 1H-SWORDS, MACES, both 1H and 2H, POLEARMS, and SPEARS

Prior to detailing the specific characteristics for each weapon type, it is important to know that there are three factors that can affect all weapons: QUALITY, MATERIALS and RARITY.

A weapon’s QUALITY is described as either POOR, INFERIOR, AVERAGE, SUPERIOR, FINE or EXQUISITE (typically the word “Average” is not displayed, so if you see a weapon described as “whatever sword” versus “poor whatever sword” or “fine whatever sword”, then it is AVERAGE quality).  A weapon’s quality will affect its accuracy, damage, blocking, range for ranged weapons, and, of course, price.

MATERIALS refers to the substance that the weapon is made from.  In order of worse to better, metal weapons can be made from IRON, BRONZE, STEEL, and LAVA-FORGED.  BOWS can be made from YEW, ASH and MULBERRY.  All other wooden weapons (and shields) can be made from OAK, HICKORY, MAHOGANY, ROSEWOOD, and IRONWOOD.  A weapon’s material will affect accuracy, damage, blocking, price, weight, and special status effects (as described below), and range for ranged weapons.  Regarding weight, the “better” the materials the less the item will weigh.

A weapon’s RARITY will not affect any stats except for price.  However, “better” weapons will tend to be more rare, so there is a loose correlation.  Rarity can be described as COMMON, RARE, VERY RARE, EXTREMELY RARE, and UNIQUE.  For items beyond COMMON, the background color of the weapon’s thumbnail will change.  RARE and VERY RARE are light blue, EXTREMELY RARE is pink, and UNIQUE is gold.

Some weapons can have magikal effects, such as a chance to inflict a negative effect (e.g., BLIND, BLEED, PANIC, etc), inflict elemental damage (fire, ice, shock or poison), have higher accuracy, inflict more damage, give off light, or have higher accuracy/damage against specific monster types (e.g., Undead).  These usually have their descriptions listed in dark blue.  These weapons can come in all qualities, materials and rarities, but being magikal will typically raise the price several fold if not more.

Many weapons have a small chance to inflict one or more status effects, such as

BLEED, depending on their shape and makeup.  The material of the weapon can boost this stat.  Also, as stated in the Accuracy, Defense and Magik Defense section, weapons have a

BLOCKING value that can raise your DEF when attacked.  Some weapons are better at blocking than others, and some have none at all.  Also, the weapon’s material and quality will affect the value.  These will all be detailed with the various weapon types below:

ONE-HANDED SWORDS: A versatile weapon held in one hand.  Average accuracy for a melee weapon.

TWO-HANDED SWORDS: Held in both hands and does more damage than it’s one-handed cousin, but less accurate.

ONE-HANDED AXE: A weapon popular with several classes and held in one hand.  Less damage than a sword but more accurate.

TWO-HANDED AXE: Held in both hands it does more damage than the 1H version but is less accurate.

ONE-HANDED HAMMER: Has an accuracy and damage comparable to a 1H-AXE.

TWO-HANDED HAMMER: Held in both hands it is more damaging than the 1H version but less accurate.

ONE-HANDED MACE: A little more damaging than a 1H-SWORD but slightly less accurate.

TWO-HANDED MACE: More damaging than the 1H version but less accurate and requires both hands.

DAGGER: A very accurate weapon, but only does half the damage of a 1H-MACE.  Rogues can equip a DAGGER in their left hand while wielding a 1H weapon in their right.

CLUB: This inexpensive 1H weapon does slightly less damage than a 1H-AXE or 1H-HAMMER, but has an accuracy comparable to most 2H weapons.

POLEARM: This 2H weapon consists of a long pole with an axe head and sometimes spikes.  A significant benefit as a melee weapon is it can reach two squares (but still in cardinal directions).  The tradeoff is that is does slightly less damage than most other 2H weapons.

SPEAR: Similar to a POLEARM this 2H melee weapon can reach two squares (but still in cardinal directions).  It has an accuracy comparable to most 2H weapons but does damage comparable to 1H-AXES and 1H-HAMMERS.

STAFF: These 2H weapons are a hybrid between melee and ranged.  When next to a target and in a cardinal direction, it will be used as a melee weapon.  Any other target position and it is used as a ranged weapon.  It is less accurate than most melee weapons, but more accurate in ranged mode.  However, in melee mode a staff will do both a small amount of physical blunt damage as well as elemental damage.  In ranged mode it only does elemental damage.

WAND: This 1H ranged weapon doesn’t do any physical damage, but does a small amount of elemental damage (typically less than a staff).  However, they are extremely accurate.

BOW: This 2H ranged weapon is fairly accurate in the right hands of someone with a higher Dexterity.  However, arrows do about half the damage compared to a 1H-SWORD or 1H-MACE.

CROSSBOW: This 2H ranged weapon is very accurate and its bolts do as much damage as a 1H-MACE.  However, CROSSBOWS are unique in that they take an extra turn to RELOAD (the ATTACK button turns into a RELOAD button).  So you can essentially fire them only every other turn.  However, the wielder can use DEFEND during the turn that they RELOAD.

SLINGSHOT: These 2H ranged weapons are a formidable weapon when wielded by an Alchemist.  Comparable in accuracy to a 1H-SWORD and more accurate than a BOW, the Alchemist can choose from a plain shot that does slightly less damage than an arrow from a BOW, or a fire, ice or shock shot (under the ABILITIES button) that does elemental damage comparable to a WAND.  An alchemist can also upgrade their abilities to include shots that can fire poison or acid, making them very versatile weapons.  There is no cooldown for SLINGSHOTS, so any one of the shots can be fired on any given turn.