As you walk around and explore the worlds in IDC, all of your characters will move at the same speed generally, although followers may lag a little behind the formation leader as it takes a little bit for them to start moving and decide how best to follow.

In combat, things are different.  Each character has

MOVEMENT POINTS (MP).  This controls how many grid squares in a given turn a character can move before having to expend significant stamina.  If you look at the figure below, the edge of the yellow squares is the character’s MP range.  You can walk as far as that and will only expend a normal amount of stamina (typically 1 point per square, plus 30% of that reduced from maximum stamina).  However, if you walk beyond the green and yellow squares into the red squares, that takes significantly more stamina (3 points per red square plus a 60% reduction to maximum stamina).  Think of the red squares as sprinting.  It takes a lot out of you.  You generally want to avoid walking into the red unless its really necessary as it will quickly deplete stamina. 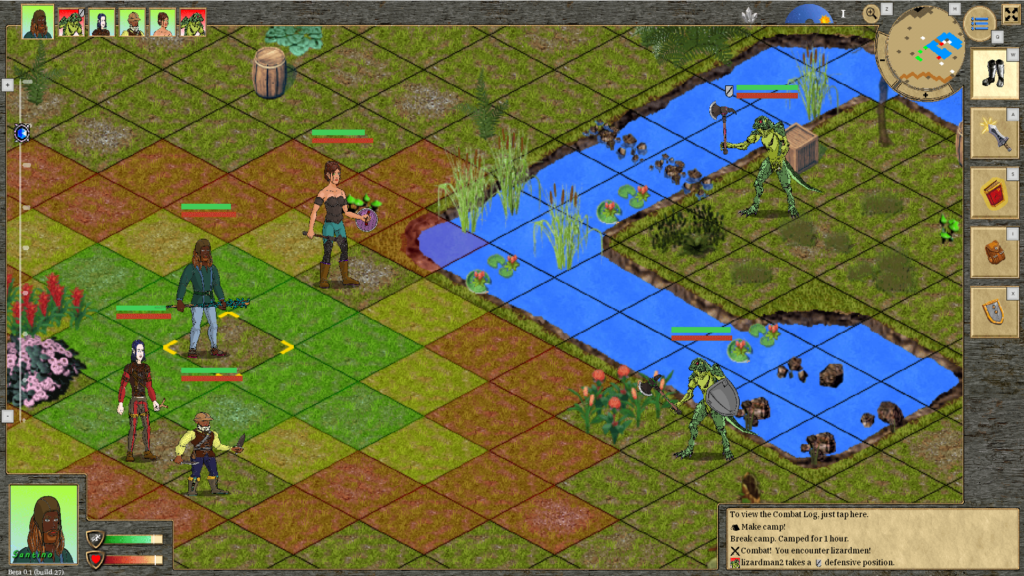 Generally, characters start with 3 MP and gain 1/3 of a point per Dexterity over 8.  However, this is rounded down so it won’t increase to 4 until your Dexterity is 11.  The Fleet-Footed skill will give +1 MP and is a valuable one that most adventurers will likely add very early on (like at level 2 or 3).  Some things can negatively affect MP as well.  Dwarves automatically have -1 MP which puts them at a significant disadvantage compared to others (they tend to make up for their “shortcomings” with other benefits).  But there are also injuries that you can sustain that lower MP, like a sprained ankle.  The SLOW status effect will also temporarily reduce MP’s in half and significantly hamper movement.

INITIATIVE (IN) is used to determine the order in which each character and monster’s turn proceeds during combat.  The higher the initiative, the earlier the character gets their turn, although it is randomized somewhat at the end of each round.

If you look at the previous figure above, in the upper-left corner you can see the placeholders for each character and monster.  Each round starts with the left-most character or creature and moves to the right.  The end of the round is when all of them have gone, then the order is re-calculated and another round starts.

Characters start with an initiative of 5 and gain half a point per Dexterity over 8.  Each monster’s initiative depends on their personal characteristics.  Most beasts tend to be pretty fast and therefore have a higher initiative.  But others are slower and thus have lower initiative.

Some negative effects, like SLOW, can temporarily lower initiative.