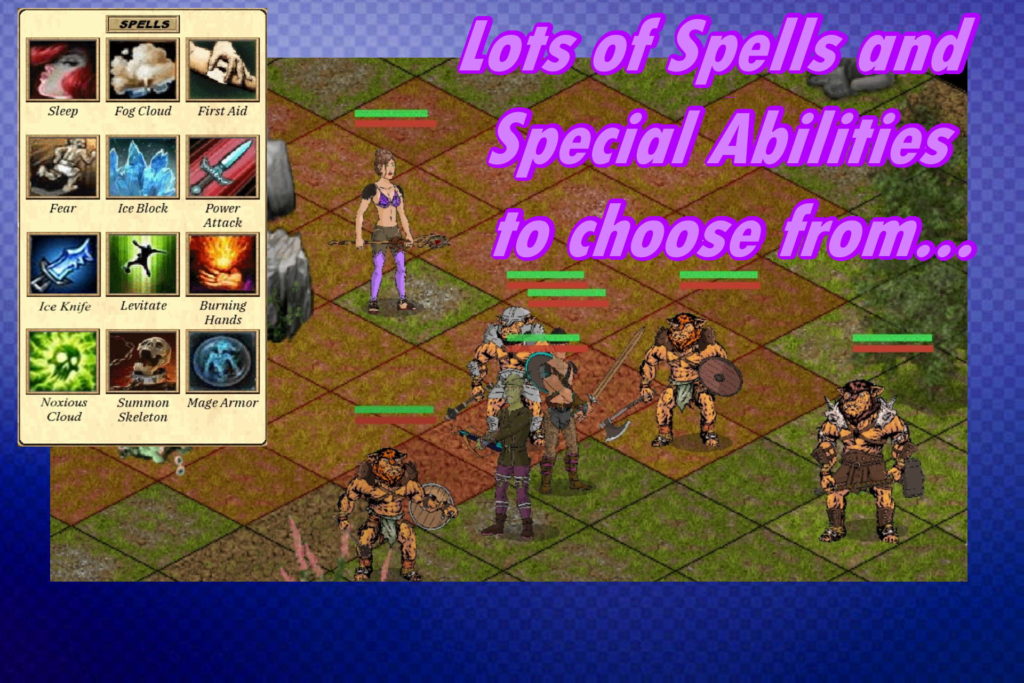 Abilities are special moves or spells that characters can have.  Abilities tend to be more powerful than normal attacks with weapons, or can affect a target with one or more positive or negative effects.  Many abilities can target multiple characters or monsters at once.  The drawback is that abilities tend to use more stamina than regular attacks.

Typically during a turn you can either attack, defend, or use an ability, but not more than one of those (there are rare exceptions).  Abilities can be used before or after you move, and you may also move, use and ability, then move some more.

Abilities are classified in three groups:

As characters gain in experience and level up, they gain more abilities.  Mages and Druids gain an additional ability every level, whereas all the other classes gain one at every odd level (e.g., 1, 3, 5, …).  However, all abilities have varying minimum level requirements, so when selecting abilities you will only be able to select those that are at or below your current level.  For example, a level 3 Mage can select only level 1, 2, and 3 abilities.  Also keep in mind that, generally, the higher the level ability the higher the stamina that must be expended to use it.  While leveling up, remember this when you see a new powerful spell become available.  You may end up expending half of your stamina to use it.  Being able to use a different lower level ability several times may be more advantageous.

Abilities can have very different targeting mechanisms. Some are melee-type and effectively can be used only when you’re in the next square to your target.  Some are ranged and can be fired at one or more targets from a distance.  Some are area-of-effect and spread out from the caster in a circle.  Some are targeted area-of-effect where you can choose the center of the area that it spreads out from.

Some abilities will affect anyone within range regardless of whether they are your ally or not, but some are limited to only affecting either allies or enemies, depending on whether it is offensive or supportive.

Many abilities have LINE-OF-SIGHT requirements to use them against a given opponent or to position them in a given spot.  If something is blocking the way, you won’t be able to target it.  But some abilities, especially those that tend to be “mental” in nature do not have line-of-sight limits.

Most abilities have a COOLDOWN period, which is a number of rounds that must pass before you can use that same ability again (you can use other abilities in the meantime).  The typical cooldown period is 4 rounds, but this can vary.  More powerful abilities, or abilities whose effects last longer, typically have longer cooldown periods between 8 and 14 rounds.  Some abilities have no cooldown period whatsoever and can essentially be used every turn (the Alchemist’s various elemental shots are like this).

Unless stated otherwise, most abilities’ effects last between 2-3 rounds, although the user may possess certain attributes and/or skills that can boost this.  For example, if a Druid casts Bane (a spell that weakens enemies), anyone that is successfully hit will have the WEAKNESS effect applied to them for between 2-3 rounds, assuming no boost from personal traits or skills.  But if this same Druid has the Weak in the Knees skill (which adds +1 duration to any WEAK effects), the duration will be 3-4 rounds.  Until the effect wears off, the victim will only do 50% of their normal melee damage.

Some abilities require an initial roll to see if there is a successful hit, just like with a melee or ranged attack as discussed in the section on Accuracy (although the numbers used may be different).  If the hit is successful, then the ability’s effects are dealt to the victim, whatever they may be.  However, this is typically only the case with abilities that do physical damage or elemental damage.

A good example is the Fighter’s Brute Force ability, as shown above.  This ability lets the user ram into their opponent causing damage and potentially knocking them down.  The ability itself has an underlying ACC of 50 for this specific character, as shown by

stat (this is taking all of their skills and bonuses into consideration).  Because you see the ACC stat at all, this tells you that a hit or miss roll must be made first.  When this happens, the target’s DEF or MGK DEF is taken into account (in this case DEF because this is a

melee-type attack).  If the roll is successful and lands a hit, the victim takes roughly 6-14 points of physical damage, plus 15% (indicated by the

DAMAGE stat).  Another roll is then made to see if the subsequent

KNOCKDOWN effect happens (a 50% chance).  However, if the original roll is a miss, no damage is taken and no subsequent effects happen either.  This makes sense because how could you knock them over if you never hit in the first place?

On the other side of this, some abilities only cause status effects and do no physical damage.  These abilities typically only have one roll for the effect itself — not to determine a “hit” or “miss”.  A good example of this is the Rogue’s Cheap Shot ability, as seen in this figure, which throws sand in the face of his or her victim potentially causing

BLIND.  The ability has a base 60% chance to work, although individual stats may boost or lower this.  When used, there is just the single roll to see if the 60% threshold is met.  If so, the target afflicted with BLIND for several turns.  If not, they are not.

Some abilities can include multiple effects.  You can see Brute Force also pushes the victim back.  Because there is no percentage displayed, it is automatic on a hit.  The Druid’s Triple Whammy has a 40% chance to cause SLOW, WEAK, and/or BLIND.  In this case, there is a separate roll for each effect.  The victim could be hit with SLOW but not the other two, or WEAK and BLIND but not SLOW, or all three or none.

One last thing to consider regarding abilities: many abilities cause ELEMENTAL damage (

POISON).  As you learned in the Health section of this guide, and will read more on in the Armor section, elemental damage bypasses armor so can be fairly powerful.  But in addition to that, fire, ice and shock have potential follow-on effects for a successful hit, depending on how much damage is done.  The more damage that is done, the more of a chance for the effect.  Fire can cause PANIC, ice can cause SLOW, and shock can cause STUN.  Each of these has a separate roll after the elemental damage is applied and the chance is roughly 5% per damage point done.  So if someone takes 3 points of fire damage, there is a 15% chance they will be afflicted with PANIC (barring any natural resistances to it).  Ice damage has an additional benefit in that it also reduces stamina by 2 times the amount of elemental damage, so someone that takes 5 points of ice damage also loses 10 points of stamina.  This is automatic with no roll required.

Poison is considered an elemental attack, but it is different from the others in that it never drains health.  Instead, poisons affect stamina, typically for a few rounds.  This is important to keep in mind so you don’t choose to go it alone in a dungeon armed only with a Wand of Poison.  You may wind up scratching your head as to why you can’t seem to kill any monsters!  Poison is still useful, but not as your sole weapon.  If poisoned, you can mitigate the effects by using DEFEND.  That is detailed more in the Battle Tactics section.

It is important to look at the stats for any given ability to understand how to interact with it.  There really is a lot of variety and each is fairly unique, but once you are familiar with the ins and outs of a given ability, you will find them to be one of the best parts of the game and certainly useful in battle.