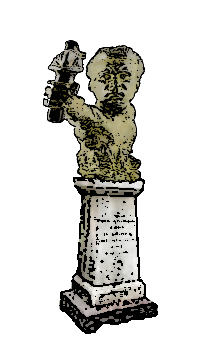 Evervale used to be a sleepy little town nestled in the foothills of the Middle Reaches.  That was until the discovery made by the Unknown Traveler, for whom there is a statue in the center of town.  Legend has it that the Unknown Traveler stumbled upon a cave nearby.  In this cave he found strange

CRYSTALS, and when he approached a mysterious-looking archway within the cave, it came aglow with a green, electric wave of energy.  He awoke to find himself in a forest, surrounded by tall trees, raging rivers and jagged cliffs which didn’t look anything like the gentle sloping hills and marshlands surrounding Evervale.

As he ventured about, he stumbled upon a village of curious, smallish, green-skinned and pointy-eared creatures.  Never having seen a Goblin before, he thought it best to hide in the bushes nearby and observe.  That is, until he stepped on a twig and *SNAP* all eyes were suddenly on him.  He made a mad dash back in the direction that he came from, all the while hearing the shouts of the Goblins in pursuit.  He could hear their angry growls and see the thick, stubby clubs that they wielded.  He even heard a strange sound whiz by his ear and saw a green glob of slime splatter against a nearby tree.

He soon found the cave where he had awoke and dashed into it.  A green light flashed and he found himself back in the original cave where he found the crystals.  Running from the cave and through the dark, stormy night, he made his way back to Evervale where he burst into the local Tavern, soaking wet and panting for breath.  He told the patrons his odd tale and the news soon spread.  Rumor has it that the Mayor of the town, a clever man, had word of similar crystals being found in nearby caves.  He put together a team of soldiers with a crystal and they ventured through this mysterious “Gate”. When they returned, the Mayor was astonished to see the trinkets that they brought back — ancient loot from other civilizations — and to hear the tales of their encounters with strange monsters.  Many soldiers didn’t make it back from that first trip.  While the trinkets were valuable, the Mayor saw something far more valuable.

Soon, adventurers from all over — farmhands, second sons, wandering vagabonds, veterans of the last wars, those down on their luck — started appearing in town, banding together to try their luck in these other worlds.  The Mayor posted guards to control the Gate and charged each party an entrance fee.  Soon, there were so many teams going through that he had to limit each party’s excursions to one per month.  The town grew and prospered.

And this is where you come in … a lonely traveler looking to make your fortune in these strange worlds filled with monsters and loot.