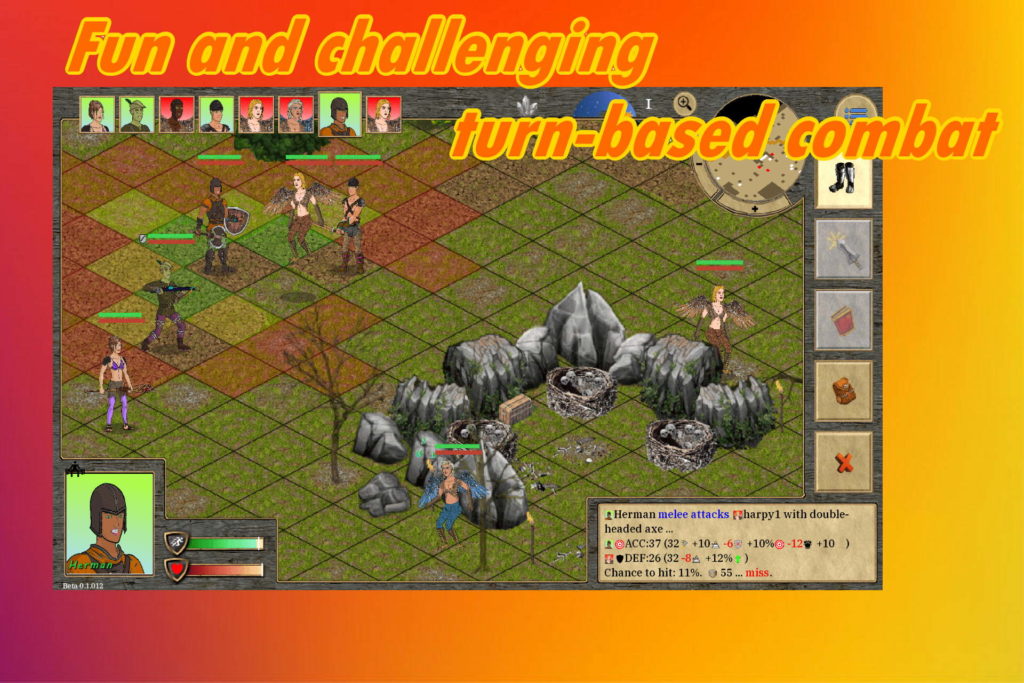 One of the things you will notice right away with IDC is that it is fairly difficult to land a hit, even at higher levels and especially at lower levels.  Most monsters are pretty good at defending themselves (luckily so are most adventurers!)  Paying attention to the stats as presented in the COMBAT LOG, especially ACCURACY (ACC) and DEFENSE (DEF), are key to successfully battling monsters.

Additionally, a roll of 5 or less is ALWAYS a hit.  So even if the numbers are really stacked against you, you always have about a 5% chance to hit regardless (that goes for the monsters attacking you as well).

There is also a chance for a CRITICAL HIT.  If the roll is more than 25 below the required number to hit, it becomes a critical hit and will do 50% more damage than normal.  For example, if your ACC is 65 and their DEF is 25, that requires a roll of 40 to hit.  But if the roll is 15 or less (40 – 25 = 15), it is a critical hit.  Some abilities and skills can also boost your critical hit chance, either temporarily or permanently.

There’s a lot that goes into someone’s ACC and someone’s DEF.  Accuracy is greatly controlled by the weapon being used … some weapons are just more accurate to start with.  Daggers and wands are highly accurate.  One-handed weapons about somewhere in the middle.  Two-handed weapons are generally less accurate.  It all has to do with how wieldy a weapon is. A two-handed sword is harder to swing around than a one-handed sword, and even more so than a one-handed axe.  So you’re less likely to hit your target with a more cumbersome weapon.

Also greatly affecting accuracy is having an

AFFINITY for a particular weapon type based on your class (affinity gives +10 ACC).  Weapon skills also boost +5 ACC and generally you can acquire 2 weapon skills for the same weapon type every 10 levels.  So if, say, your character is using a one-handed axe which has a base accuracy of 32, and you have an affinity for one-handed axes as well as 2 of the One-Handed Axes skills, your accuracy will be 52 (32 + 10 affinity + 5 x 2 skills).

Weapons also get an accuracy bonus based on Dexterity.  This bonus equates to +2 per Dexterity over 8.

There are many other factors that can affect accuracy.  You may have received the benefit of a buff that boosts accuracy.  You may be using a bow or wand and have the Ranged Accuracy skill.  You may have received a positive effect from an activity in town.  Rogues that dual-wield have accuracy bonuses, plus there are specific skills to boost that. There are skills that give accuracy bonuses against certain types of monsters, like Goblinoids or Insects.  On the down side, you may be low on stamina which can lower accuracy, or have an injury that negatively affects accuracy.  A status effect like BLIND will temporarily reduce your ACC by 50%.

A factor that can significantly affect accuracy is the light level.  Unless you have a skill or ability that can compensate, firing into or from dark areas will reduce accuracy.  And many monsters can see perfectly fine in the dark so they aren’t affected.  Having a torch in hand, or standing near a light source, can reduce this penalty.

Another significant factor that degrades accuracy is wielding a shield in your off hand.  Shields can increase your DEF, as we’ll discuss in a minute, but they negatively impact your ACC.  How much so depends on the size of the shield and whether you have a skill like Shield Handling to reduce the penalty.

Similar to how a shield reduces ACC, heavy armors (like plate, scale or chain) can also lower your accuracy because you’re less agile in them.

Finally, morale will affect the ACC for NPC’s.  We’ll discuss this in detail in another section, but a happy hireling can gain as much as +5 ACC and an unhappy one can lose as much as -5.

For monsters, generally the higher their level the higher their accuracy goes.  So a level 3 skeleton will be more accurate by a few points than a level 1 skeleton.  This keeps adding and adding up as the dungeon levels get harder, so if you don’t keep looking for ways to improve your accuracy as you level up, you may find yourself soon outgunned, even by monsters that at lower levels you didn’t have much trouble with.

It’s important to state here that we’ve been talking about MELEE and RANGED accuracy up to this point.  Some abilities, especially melee-type ones that depend on an equipped weapon, will use the same parameters to determine accuracy as the underlying weapon, although some abilities can also grant an accuracy boost (or reduction).  However, many abilities use different criteria to determine accuracy.  Refer to the stats of any given ability to see its accuracy as they can vary greatly.

Additionally, ability accuracy can be affected by many of the same factors as for melee and ranged attacks, with some additions.  Abilities that are ranged in nature get the Dexterity bonuses previously mentioned.  Some classes get bonuses for particular ability types based on different attributes.  For example, a Paladin using a HOLY ability will get a 5% ACC bonus per Charisma point over 8.  Mages and Druids will receive +3% ACC on MAGIK abilities for each Intelligence point over 8.  And many of the penalties also apply, such as armor, lighting (but not on all abilities), prior hit, morale, etc..

Also, you get a +2 ACC bonus for each level you are beyond the ability’s minimum level.  So, for example, a level 5 Mage using a level 3 magik spell would get +4 ACC.

DEFENSE (DEF) is typically much simpler.  Most characters have a base DEF of 12 plus 2 per level (beyond level 1).  So a level 2 character would have a defense of 14, level 3 would be 16, etc..  Dexterity also contributes to DEF to the tune of 2 points per Dexterity over 8.

icon and when a shield does it you see the

icon).  Shields tend to contribute a significant amount.  A poor wooden buckler would contribute about +4 DEF.  A medium iron heater would be about +9 DEF.  A superior steel tower could be +16 or so.  But most (not all) weapons also have inherent BLOCKING abilities.  For example, most lower quality one-handed weapons have a blocking value of 3, whereas most lower quality two-handed axes, swords, maces and hammers have a blocking of 4. Daggers, spears and crossbows have a lower amount at about 1.  Bows, wands and slingshots don’t block at all.  Staves are pretty good starting around 4 or 5.

The subtlety to understand about weapon and shield blocking is that if you are wielding both, you only get the one from the item with the highest value — you would not get both the blocking from a one-handed weapon and a shield.

Monsters have varying levels of DEF depending on their capabilities, but similar to ACC it tends to go up as the levels get harder.

Against most abilities, unless they are melee or ranged weapon-types, MAGIK DEFENSE (MGK DEF) is used.  Most characters have a base MGK DEF of 10 plus 2 per level (beyond level 1).  So, unadjusted, this would tend to be just slightly less than DEF.  But MGK DEF is also boosted by 4 points per Intelligence above 8 and 3 points per Fortitude above 8.

While most monsters use physical-type attacks (think claws or talons), many of them have inherently magikal abilities.  Characters that do not have a higher Intelligence or Fortitude are therefore more susceptible to these types of attacks that defend with MGK DEF.  There are skills that can be slotted that specifically boost MGK DEF, and these are sometimes worth the cost — especially for classes like Fighters that tend not to emphasize Intelligence.

MGK DEF for monsters is similar to DEF in that each monster has varying levels depending on their capabilities.  Some monsters tend to be just naturally stronger in defending against magik.

In the COMBAT LOG, you can tell after an attack whether DEF or MGK DEF was used based on the black shield icon.  MGK DEF has small sparkles in it whereas DEF is solidly black.